Change is in the Air for MB Jessee Painting ! 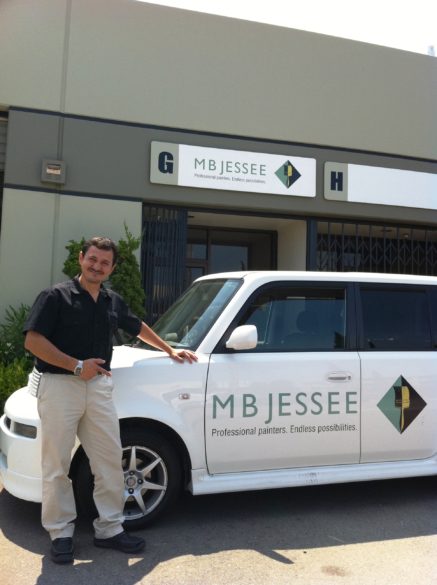 Boy, when MB Jessee has good news to share—we just can’t wait! We are super excited to announce that Ricardo de Jesus, long a familiar face around here, has been promoted from foreman to estimator. He joined us in 2006 as an apprentice and from the beginning, we knew he was special. Eager to learn and ambitious from the start, a mere two years later he’d worked his way up to a lead painter position. Then, in early ’09, he became a foreman. We feel his sharp eye for detail and his hands-on painting knowledge will serve him well in his new role.

Ricardo is a great guy—funny and smart—and he is well liked by our many clients, contractors and designers. And yeah, the rest of us at MB Jessee like him pretty well too! Ricardo will be along in a little bit to introduce himself. But for now, join us as we welcome Ricardo to his new role. Cheers Ricardo!Cha

Why People Hire Us

Experienced Oversight of Every Job

“MB Jessee painters are stellar! As a designer I've worked with numerous companies over the years, and MB Jessee is a top-notch firm. From the first phone call to the final clean up, every person is courteous, professional, and hard working. The owner, Matt, is a charitable leader who has instilled his team with integrity and honesty providing the customer with a first class experience at a fair price with a paint job that is guaranteed to last. I highly recommend MB Jessee. Thank you Matt and your STAR crew-Daniel, Rigoberto, Vicente, Edy, Pedro, and Mario, for a job well executed! Cynthia Brian, ASID, Starstyle® Productions, llc”

“Julie, by the way, I have never been so impressed with the service of a painting job before! It was like magical elves came and painted our walls without us having to do a thing! It looks amazing and just wanted to let you know how happy we are. Thanks”

“Julie,Just to let you know I am very appreciative of your crew catching the plumbing/mold problem. It was very astute of them. I wanted to let you know that again your crew has done excellent work here, please pass this along to Mr. Jessee. There are some bumps in the road here, but the painting and your crew has not been one of them. Their work is the only thing going right currently, and this crew is very nice and respectful. It is much appreciated. Thank you again.”

“I cannot imagine finer painters--and I have worked with many. They work exceptionally hard. It is a joy to see their workmanship!”

“Awesome work by highly experienced, professional painters. They were: Conscious about the amount of time it would take. Ours had a lot of pre-work and took 3 weeks. Accommodating when we added a few last-minute changes Understanding when a heatwave hit and we remove some of the plastic sheeting over windows, which they had to put back up the next day. Accessible, especially the on-site crew (Hi Jose & Victor!) -- always answering questions and checking in. The end result is a perfect paint job that makes our 94-year-old house look brand new. I would definitely hire MBJ again”

“MB Jessee just finished our exterior and we couldn't be happier with our experience. The foreman (Pedro) and lead painter (Ricardo) were incredible to work with: they communicated scheduling clearly, Ricardo was a joy to be around every day, the showed up early every day, were incredibly tidy and did great paint work. The final walkthrough experience was incredible. Pedro pointed out items I missed demonstrating a clear desire to complete another quality project. I highly recommend them. As others have noted they definitely aren't the cheapest but you quickly realize that you're getting what you pay for. The 3-year guarantee is also a nice touch since there are likely touch-up items that will show up after the job is done.”

“I loved working with M.B. Jessee from start to finish on a relatively small paint job that grew a bit. I felt in very good hands from the moment Matt Jessee came out to give me the estimate and talk about my job. He was very easy to talk to and he handled my changes very well. Then the actual work done by Rigoberto and Mario was impeccable. They were neat and meticulous and the paint job looks beautiful. I could not have asked for more and when I did, they accommodated me 100%. I will not hesitate to call M.B. Jessee again and to refer them to friends.”

“Hello Matt,Just another notice of thanks to your wonderful crew, Rigoberto, Javier and John. They did fantastic work, with Rigo providing meticulous and conscientious attention to the details and excellent woodwork finishing, as evidenced by the beautiful fireplace. Javier did a fantastic job in the bathroom especially, it looks "brand new," and John always does quality work, both with the interior and exterior. I can tell they care about what they do. Rigo's "punch out" was very thorough, too. I will call again when I need some more work and will definitely recommend your company and fine crew. I also felt as a homeowner, I could leave my house in their good hands during the day and that took a lot of worry from me, they were honest, prompt and reliable. They were also very kind, respectful and clean in their work, very professional. Thank you.”

“I love the article in the paper on your company. Thank you for supporting our community by painting at the Claremont Middle School. Thanks!”

“Edy and crew are hard at work. They are doing a great job. Very professional outfit you have. Your crew is a delight. You may use me for a reference!”

“We just wanted to let you know how pleased we are with the work of MB Jessee Painting and your employees. Everything turned out beautiful. Our foreman was great! He was punctual, professional, neat and very accommodating ... and went the extra mile. We will definitely recommend you to our friends and family.”

“I just wanted to send you an email to say that John did such a great job over here today. He is truly a hard worker. He has the perfect balance of friendliness, honesty, and professionalism. I trust him. He takes the time to do the job to the best of his ability and that is what sets him (and your company) apart from the competition. He didn't make me feel rushed. He really made me feel like our job was the most important thing in the world. Thanks again!”